"An Orange a Day" Sponsored By: Pearson Ranch California Oranges

For as long as humans have been around, we’ve made mistakes. Before the term “human error” existed we used to simply point fingers at the sky and blame the gods for our misfortune. Later the more “perfect” amongst us would conveniently force blame onto witches, warlocks and sometimes even voodoo hexes for our mistakes.  Eventually in 1949, we got help in the blame game from Capt. Edward A. Murphy, an engineer, who, while working on an Air Force project, uttered the words… "If there is any way to do it wrong, he'll find it!” Capt. Murphy spoke these words while cursing a technician responsible for wiring a transducer wrong, thus ushering in the term “Murphy’s Law” into our lexicon. So at least from that point on, we had this “law” we could point to in order to take a little bit of the sting away from our mistakes. But eventually as we sought more help in dealing with our “humanness,” we learned that it was O.K. to take the blame for being human, and that mistakes were merely a part of the human experience. Once we finally learned it was perfectly acceptable to call ourselves out for our mistakes, we decided to look in the mirror and call them “human errors.” Except of course for the bank, they still won’t take any responsibility. Because when the bank makes an error on your account, they call it a “keystroke error.” Good thing those key strokes happen all by themselves, or someone would have to take the blame for cashing my $50 check to my credit card issuer for $500 (a true story)!  Anyway, hopefully we’ve learned a few things after some of the bigger man made problems due to “human error,” that we created for ourselves. The creation of Africanized Honey Bees kind of comes to mind when I look at the list of human blunders.  That was a mistake that should have never happened. These days we grapple with people blaming us humans with “man made global warming” or “human caused climate change” or whatever you want to call it. I’m not saying we did or didn’t cause it, all I am saying is that there is plenty of blame going around on this one.  But one of the more strange “human” things that we get blamed for from time to time is the phenomena known as “spontaneous human combustion.” That’s when, for the lack of a better explanation, humans simply bursts into flames for no real reason. Who is really to blame for that one?  O.K. fine, let’s just say for the sake of this blog that it really happens, but is it really our fault, is it a result of human error?  You never hear about anyone blaming sharks or giraffes for suddenly catching on fire or what should be known as “spontaneous animal combustion.” And no, the ending of the movie “Jaws” doesn’t really count. Besides, blame it on the human (Chief Brody), he was the one who blew up the shark! But I digress.  As we move forward, I am glad we can now blame ourselves for our mistakes. I think we’ve kind of grown up as humans and are now in the “golden age” (if you will) of self blame for our many human errors.  We are now mature enough to say “my bad” when you forget the milk at the store, or forget to close the door behind you. But soon, I fear that we will once again start to shift blame back away from humans. As we see the “rise of the machines,” more and more I hear people blame computers and machines for mistakes. “My stupid phone messed up.” I can’t tell you how many times I’ve heard that one. Or “there must be something wrong with my computer.” Oh sure…be like the bank and blame some nebulous “key stroke error” on something that you more than likely did wrong yourself.

What I don’t fully understand is our aversion to being wrong and making mistakes. We know it’s going to happen.  Think about it, we’ve all heard the sayings, “everybody makes mistakes” and “to error is human.” In fact, some of us are so comfortable with it, that we even know when in the very near future we are going to make mistakes. We even warn people around us that a mistake might be coming.  How many times have you said to someone in a conversation…”I could be wrong, but isn’t that (fill in the blanks).  Or my favorite, after maybe too many drinks, and we become a little more ambitious, we often tell ourselves (and sometimes we even say it out loud not meaning to)…”I’m probably going to regret this, but I’m going to…” which usually leads to a “my bad,” or “I am so, so sorry about last night.” Yes, we do make mistakes, all of us. No matter, because deep inside we all have the power to try and help fix some of what we did wrong. It may not fix everything, but we can always say “I’m sorry,” and “I forgive you.” Both of those things go a long way, and that’s what makes us human.

Thank you so much for taking a few minutes out of your day to read my blog. And if you clicked on it by mistake, that’s ok. I know, it was probably just, you know… “human error.”

I’ll see you in the groves.

Posted by Farmer Tony No comments:

Farmer Tony
I am an Orange farmer in the "Orange Belt" of the San Joaquin Valley in California. The blog is sometimes actually about farming oranges, but mostly it's about how I see life and the world around us. I hope you enjoy reading and appreciate it in the "spirit" in which it is done. Peace & Thanks for reading! :o)

A "Thank You" from a Farmer

I just want to extend a sincere "thank you" to everyone who supports our nation's small farms. Everyday (and I mean everyday), farmers across the country strive to produce the very best products they can! From "sunup" to "sundown" farmers fight their way to survive in an industry being quickly overrun by large "commercial" farming operations. Along with high taxes, heavy federal, state and local regulations, increasing energy prices, and growing foreign competition, the "gamble" that farmers take everyday on trying to make a living while producing the highest of quality agricultural products, couldn't be rivaled in a Las Vegas casino. So, from all the small family farms across America; thank you for your support!

Remember for the best oranges on the planet...it must be LOVE! 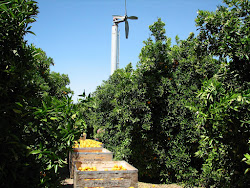 Here is the view down a row of navel orange trees on our farm. Oranges have been harvested and ready to be packed and shipped out. (Click on the image to go to our orange page) 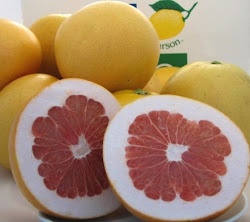 Beautiful, delicious and fragrant Pomelos are wonderful peices of fruit. And we grow them right on the farm. 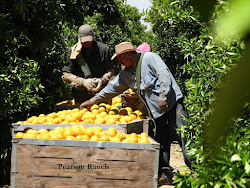 Our Navel Oranges and Pomelos are hand picked fresh off our farm in the heart of the San Joaquin Valley's "Orange Coutnry". 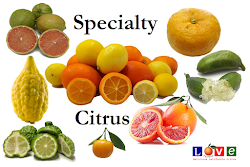 When you're looking for specialty citrus, look no further than Pearson Ranch